Little Common Ramblers 1st XI got off to the perfect start to the Intersport Trophy competition beating East Dean by two wickets.

Having lost the toss on a sunny Saturday in East Dean, Ramblers were asked to bowl in the height of the heat. On a typically difficult early season pitch, Ramblers had success with regularity as 5 of the bowlers shared the wickets between them. It was Joe Croft (8-0-21-2), on 1st XI debut, who took the early wickets – reward for a fine spell of swing bowling. Mark Hopkinson (8-1-14-2) and Jon Meredith (8-1-23-1) made sure East Deans score never got away from them as they finished the middle overs ahead of the game. Some late hitting from East Deans lower order proved a small fight back however Deluar Ahmed (8-0-26-1) and Perry Holland (2.3-0-9-2) meant East Dean could only muster up 137 runs.

In reply, Little Common got of to a shaky start losing three early wickets, however, contributions from Alex Coombs (30), Jon Meredith (13), Mark Hopkinson (26) and Michael Chambers (17) meant the Ramblers were in pole position. A controversial mankad dismissal threatened to turn the match on it’s head, however, some lusty blows from Perry Holland (17) and a cool head from Ben White (7*) meant Ramblers won by 2 wickets and 13 balls to spare.

See the full scorecard HERE. Little Common will take on St. Peters 1st XI on Saturday in the next round of the competition. 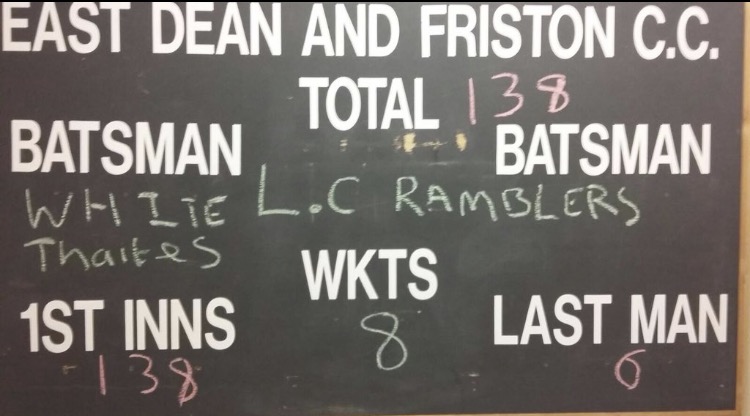 A snapshot of our club